The shortly after the release of the iPhone 7/7 Plus, a unique problem emerged with many of these new phones.  The symptoms included a very slow boot sequence (sometimes up to 5 minutes), a “grayed out” voice memo icon, problems with the ear and loudspeakers, failure of the device to record, and occasionally touch issues.  After the usual assorted parts swapping did not resolve these issues, it was thought to be a software issue. After several software updates, with no success, there was a lot of head scratching.

Finally, an independent repair shop like ours discovered that the problem was similar in nature to the now famous “touch disease” that was so prevalent in the iPhone 6 and 6 Plus.  While Apple corrected the touch disease in the iPhone 6S, 6S Plus, 7 and 7 Plus by moving the touch control functions from the motherboard to the screen itself, the same kind of problem involving weld failure occurred, only now it was under the Audio IC Chip.  When the phone was bent or dropped hard, the flex created a fault line which happened to run under the Audio IC Chip. 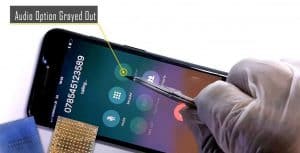 The Audio IC Chip controls or affects a number of circuits in the iPhone 7 and 7 Plus, such as booting, audio speakers, microphones, touch, and recording.  And, as the flexing of the board damages the weld under the Audio IC Chip, it also adversely affects the resistance between the chip and an important capacitor.

Repairing this signature problem is easily achieved, as long as you have the right equipment, skill, and knowledge. First, the Audio IC Chip must be removed without blowing tiny components off of the board in the process.  Once it is removed and the pads are cleaned, you MUST run a jumper wire from the C12 pin to the capacitor mentioned earlier in this article. If you do not, the phone is going to have the same problem the next time it is dropped or bends.  And finally, the Audio IC is re-bolled and re-flowed back onto the board.

At Fixmysmartphone/Totally Unwired, we do this repair frequently and have a very high success rate.  For more info, check out our video Audio IC Repair on our website.

Fixmysmartphone accepts phones for repair from walk-in customers, as well as customers who mail them in from all over the United States.  We have a no fix/no pay policy and we don’t charge for diagnosing your phone. We also offer data recovery services for phones and tablets.