Having been in the Satellite business for 20 years here at Totally Unwired, we have witnessed the entire evolution of the Internet. When dial-up speeds went up to 56K, we thought that was really fast. Now, having a 56K connection just basically means your internet is out!

Gradually, DSL and Cable Internet became available in the more densely populated areas, at Broadband speeds. The trend now is toward Fiber, with really fast speeds and better dependability.
However, if you live in a rural area, you have fewer options. If you live on the outskirts of Ruston, La., for example, you might be able to get DSL, Fiber, or Cable Internet, but only if you are really close to town. If you live in, say, Dubach, Mineral Springs, Quitman, Hico, Lisbon or Weston, your only options are likely to be Satellite Internet or Cellular Hotspots.

Satellite Internet has come a long way since the first Starband and Direcway Services rolled out in 2000. Starband eventually went under and Direcway would later evolve into Hughesnet. In 2004 Wildblue launched, offering the then unbelievably fast download speed of 1.5 Megs!

Dish Network later became a wholesale partner with both Hughesnet and Wildblue, offering Dishnet, which was either Hughesnet or Wildblue that was administered by Dish. Although it was named Dishnet, the Modems and Radios were identical to those used by the respective companies that were providing the satellite internet signals. Dish would later acquire ownership of Hughesnet though 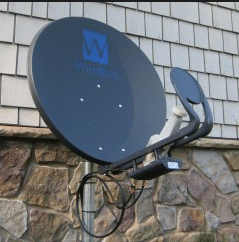 Echosphere, which is a subsidiary of Dish. Dish then ended the Dishnet service and no longer activates new customers under the old Dishnet plans. On an interesting side note, Totally Unwired, here in Ruston, La., sold the very first Dishnet ever sold, to a customer in Quitman, La. As of the last time we checked, that account is still active.

Wildblue evolved into Viasat in 2009. In October of 2011, they launched Viasat 1, which offered true broadband speeds. That satellite is completely full at the moment, as it relates to North Louisiana, as no new customers are being activated on the Viasat 1 beam here. In 2017, They launched Viasat 2, which offers screaming fast speeds, up to 100 MBPS, but it is only available in areas serviced by the small beams, as we will get into later.
In 2017, Hughesnet launched Echostar 19, which greatly improved their service and allowed them to offer true broadband speeds, with the new Generation 5 equipment.

So that gets us to the subject of this article: what are my internet options if I live in rural North Louisiana? For the most part, the answer is Hughesnet (Satellite), Viasat (Satellite), or a cellular hotspot (Verizon or AT&T.) As of this writing, the services are as follows:

1. Viasat Internet
If you want to watch Netflix, Hulu, Amazon Prime, or any other streaming service, Viasat would be your best bet. However, Viasat is currently not available everywhere in North Louisiana. Due to a satellite anomaly, all of the panels on Viasat 2 did not open fully. Only the Small beams are open in North Louisiana. The northernmost beam has a footprint that covers Dubach, Bernice, Hico, Spearsville, 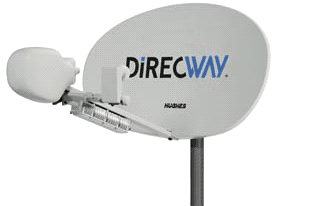 If you live in the footprint of a Viasat 1 Small Beam, the plans are really good, with unlimited data (explained better later.)

While the plans are unlimited, once the proprietary data is used up, your speeds may be slowed down if the web is congested. This does not mean that Viasat slows your connection speed, but your traffic is simply not given priority. Streaming quality for the plans are 360P, 480P, 720P, and 1080P, respectively. The modem used with Viasat 2 has an excellent built-in wireless router. Customer feedback from these plans has been very positive. 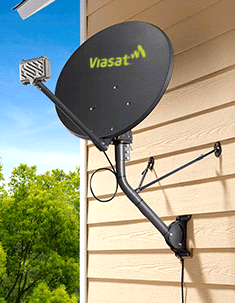 All plans include a monthly $9.99 equipment lease fee, however, if you bundle this with Dish Satellite TV Service, there is a monthly $5.00 discount. Unlike Viasat, Hughesnet is available in the large section of the State where Viasat is not available, such as Monroe, Calhoun, Choudrant, Jonesboro, Homer, Haynesville, Winnsboro, Winnfield, Dodson, Weston, Chatham, Montgomery, Eros, and Arcadia.
There is no installation fee for Hughesnet, but there is a non-refundable application fee, which is based on your geographic location and other factors. This fee is not static and usually runs about $20.00. This fee is only assessed if the customer does decide to subscribe to the service. 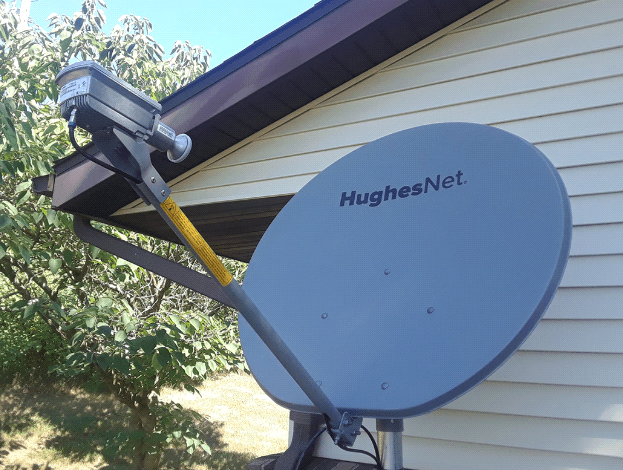 All prices and plans described here are valid as of 10/3/2018 and are subject to change.  Both Viasat and Hughesnet offer service plans for ongoing maintenance of their respective systems.

Online gaming DOES NOT WORK WELL with  geosynchronous satellite internet and there is nothing anyone will EVER be able to do about it (in our lifetimes.)  This is because the laws of physics say that nothing can move faster than the speed of light, which is 186,000 miles per second.  And because the satellites used for satellite internet must be geosynchronous (stay in the same place on the horizon), they have to be parked 22,400 miles above the equator.  Radio waves travel at the speed of light, but the 44,800 mile round trip of Viasat or Hughesnet signals, just to reach the satellite and return to earth, means that there is latency or lag time.  So, it doesn’t matter how fast the connection is, the person playing through a satellite internet connection is going to be at an awful disadvantage.  The only way this could be fixed would be for the technology to be developed that would allow for a shift to non-geosynchronous, low earth orbit satellites to replace the current fleet.    And that is unlikely to happen any time soon, due to a whole host of technical problems that would have to be overcome.

If you are interested in Satellite Internet, Satellite TV, or just need more information, call us at 318-513-2500, or visit our website www.totallyunwired.net.  We are located at 1319 N. Vienna St., in Ruston, La., which is beside the Peking Restaurant.  We’re we do our own installations and can also do custom wiring.  We are available to service all of North Louisiana.